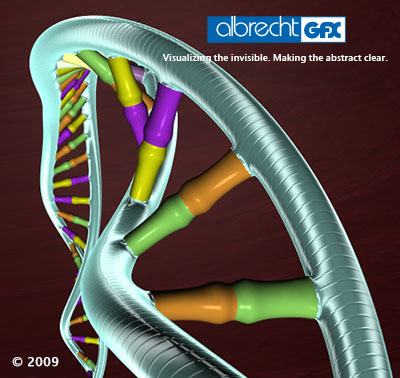 Curved DNA strand with base pairs between “rails” in the foreground.

In our business, we often work with scientists, researchers, and technical experts. As a non-scientist, I am in continually in awe of the discoveries and efforts to make the world a better place to live, e.g., last week’s announcement by the Nobel Prize in Chemistry for work in mapping cell repair of damaged DNA on a molecular level.

2015 Nobel Prize in Chemistry Press Release:
“The Nobel Prize in Chemistry 2015 is awarded to Tomas Lindahl, Paul Modrich and Aziz Sancar for having mapped, at a molecular level, how cells repair damaged DNA and safeguard the genetic information. Their work has provided fundamental knowledge of how a living cell functions and is, for instance, used for the development of new cancer treatments.”

Our workday starts like it does for many people, a quick meeting over coffee to discuss what we’re working on today, what needs to be done next. The rest of the day, Don and I typically work alone. Not action-packed, but what is needed to get technical projects right.
Last week was different. We attended a large international trade show. It was fantastic to be out of the office for a few days–seeing people we knew, meeting others we didn’t, learning something from everyone.
Visiting booths, listening to company reps, reading product literature, talking to other attendees was both exhausting and energizing. We have a better understanding of current industry trends and the changing landscape for scientific / biotech companies: more technical content, increasing international presence, efforts to widen market reach to more diverse audiences. We’ll try to incorporate last week’s experiences as we’re back working on projects.